You are here: Home / Numismatics / About the Sovereign Gold Coin 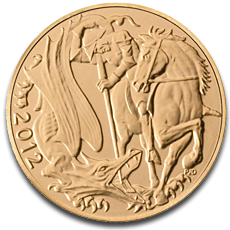 All the sovereign gold coins have standard characteristics in what concerns their diameter, their weight, and the alloyed from which they are made. The 22.05 diameter gold coins have a weight of 7.968 grams out of which the gold used in manufacturing one gold coin weighs 7.32 grams or 0.235420 troy ounces of pure gold. This weight, that is the equivalent of 113 grains and has remained the same until present day, was fixed by the coin act of 1816. The British gold coin has 22 karat purity or 91.76% fineness and the rest of 8.33% is copper.

Concerning the design of these British gold coins worldwide known, we could state that the reverse is a standard one depicting the mythical slaying of the dragon by St. George. This reverse common to the sovereign gold coins was engraved by Benedetto Pistrucci. On the obverse there are illustrated the portraits of two queens, Queen Victoria and Queen Elizabeth II, and two Kings, Edward VII and George V.

Why Invest in the Sovereign

The sovereign gold coins are internationally recognized for their value. These gold coins have been around for many years and they presented a great interest from their first mintage, first as a form of monetary exchange and then as coins sought after by numismatists all over the world and desired by investors to preserve their welfare.

Although the sovereign gold coins have a higher premium over their intrinsic value when compared with other coins which serve as an instrument for investment, their value, history, beauty, and rich history make the sovereign loved and appreciated by everyone from investors to collectors.

When investing into something with such a long tradition you automatically gain a sense of security, you are sure that your savings are transformed into something safe like it is the gold with a high purity. You can also be assured that you are in the possession of a liquid asset which offers privacy and it is free of taxes. All these advantages make the sovereign a safe investment which can also bring a good profit if traded wisely.

Interesting Fact about the Sovereign

An interesting fact about the sovereign gold coins is that they were items included in the survival kit of soldiers that fought during World War II and also for soldiers participating in the Persian Gulf War, also known as the operation Desert Storm. The reason for that is the fact that the full sovereign gold coins have been a form of monetary exchange for more than 500 years, with international recognition.