You are here: Home / Numismatics / About the Lunar Rabbit 2 oz Silver Coin 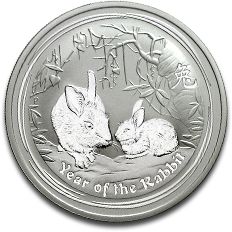 Since 2011 was the Year of the Rabbit, the Lunar Rabbit 2oz silver coin was issued by the Perth Mint as belonging to the Australian Lunar series. It is a beautifully designed silver coin that belongs to an interesting collection and also it has perfect bullion characteristics to be desirable by any investor.

The Lunar series was a great success among investors and collectors since its start in 2008 and things will stay the same until its end in 2019. Every zodiac sign from the Chinese calendar has allocated by the Perth Mint only one year of issuing.

On the obverse of the Lunar Rabbit 2oz silver coin are inscribed in a circle the following: ELIZABETH II whose portrait facing right appears as the illustration on the head side of this bullion coin made of silver, AUSTRALIA which is the country under which authority the coin was issued, 2 DOLLARS the face value at which the Lunar Rabbit 2oz silver coin was minted as legal tender, 2011 the year when this silver coin appeared, and 2oz 999 SILVER the purity and the size.

The reverse of the Lunar Rabbit 2oz silver coin illustrates two animals that give the name of this silver bullion, two rabbits surrounded in a forest while nestling. The only inscription is Year of the Rabbit and the Chinese character for rabbit.

The Lunar Rabbit 2oz silver coin is perfect for beginning investors that firstly want to see how profitable the investment into precious metals is. Since they do not want to transform a considerable amount of money into bullion coins, they could surely direct their attention towards the Lunar Rabbit 2oz silver coin which besides being a beautiful coin is also an affordable one.

The Australian Lunar series is an exotic idea for starting a collection that comprises all twelve animals from the Chinese zodiac issued in silver. This collection could trace its start in 2008 and it will end being issued by the Perth Mint in 2019. So for now numismatists can take their time and obtain whatever coins are missing. If the Lunar Rabbit 2oz silver coin that was issued in 2011 is one of those items a collector should not waste his time and acquire it.

The price for the Lunar Rabbit 2oz silver coin is established by the movements that occur on the silver market. Therefore, if the price for silver increases so does the value of this silver bullion coin that was minted in 2011, in the Year of the Rabbit.