You are here: Home / Numismatics / About the 20 Kronen Gold Coin 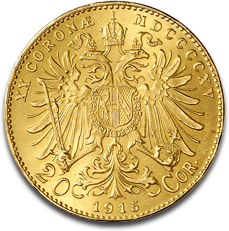 These new renderings of the Austrian gold bullion coin bear the date of 1915, honoring the long and fruitful reign of Emperor Franz Joseph I. The 20 Kronen gold coins do not have the status of legal tender.

The 20 Kronen gold coins have on their obverse the portrait of Emperor Franz Joseph I, his bust is facing right. It is the illustration of a bear headed Emperor. The Emperor has company on the obverse of the gold coins from the part of the words FRANC IOS I D G IMP AUSTR REX BOH GAL ILL ET AP REX HUNG.

He is commemorated by writing on the reverse of the gold Austria coin, the year 1915. This year reminds people of one of the longest modern reigns and that belongs to Emperor Franz Joseph I, a reign that lasted no more or less than 68 years.

The reverse of the 20 Kronen gold coins also depicts the double headed eagle which is a symbol of the Austrian Empire. The Imperial eagle is surrounded by the following words: XX CORONAE MDCCCCXV 20 1915 COR.

On the edge of the Austrian gold coins are written the words Vnitis Viribvs.

These commemorative gold bullion coins minted after 1916 and bearing the year 1915, no matter the year in which they have been minted, are firstly a great gift. The 20 Kronen gold coins are especially suitable for people passionate by history and by vast and strong Empires that rule a part of this world. These gold coins will surely make for an unforgettable gift.

The 20 Kronen gold coins are also desired by numismatists since we are talking about a commemorative coin bearing the portrait of one of the most beloved monarchs of Europe.

These small and beautiful 20 Kronen gold coins are a perfect way to diversify a portfolio. They are a way to own gold, to store wealth by investing into Austrian bullion gold coins, and a way for investors to be sure that are safe from inflationary times.

The 20 Kronen gold coins can be found on our website at the price of EUR 256.65 which is free of VAT.