You are here: Home / Numismatics / About the 20 Francs Ludwig XVIII Gold Coin 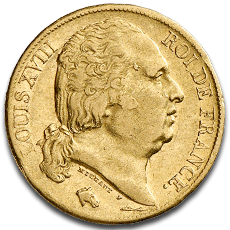 Minted between 1816 and 1824 by the French government, this 20 Francs Ludwig XVIII gold coin can be referred to as a coin with a short span of life which makes it very desirable for collectors.

This particular France gold coin with a denomination of 20 Francs amounts the desirable qualities searched by numismatists: it was minted in a scarce mintage during a short period of time, it is old with an age of almost 200 years, and on our website you will find the 20 Francs Ludwig XVIII gold coin in a great state of preservation.

Taking into consideration that gold bullion coins, including the 20 Francs Ludwig XVIII gold coin, are priced accordingly to the gold spot price, and since this price of the precious metal has had an evolution that had a powerful decision of investment for every investor, this French gold bullion coin is a perfect and beautiful gold asset for everyone.

On the reverse of the 20 Francs Ludwig XVIII gold coin is depicted a laureate French crowned shield. Under the shield it is inscribed the year of minting which is 1819, in the case of the coin illustrated on our website. The other inscription present on the reverse is the denomination 20 F.

King Ludwig XVIII or Louis XVIII was a king with a somehow troubled reign. He was vanquished by Napoleon Bonaparte after escaping from his island prison on Elba. Fortunately for him, Napoleon had a short and not so glorious comeback so in 1815 King Ludwig XVIII returned on the throne of France and a year from his return, in 1816, began minting the 20 Francs Ludwig XVIII gold coin.

He is as famous as the gold coin on which his portrait appears for wanting to balance two principles from that time: royalty and liberty. He is also the last French monarch to reign until his death.

Being minted under the denomination of 20 Francs, the 20 Francs Ludwig XVIII gold coin has the same set of characteristics as the other gold coins minted in this denomination, the only difference being the periods in which they were produced. Amongst these characteristics it is the purity of 90.00% or 900/1000 purity.

What are also common are the overall weight and the weight in pure gold. The weight of the gold together with the alloy sums up 6.45 grams. The pure gold used in manufacturing a 20 Francs gold coin is 5.81 grams or 0.1867 ounces of gold. The diameter of this gold coins is of 21 mm.

The 20 Francs Ludwig XVIII gold coin can be found on our website at a price which includes VAT.