You are here: Home / Numismatics / About the 1000 Schilling Gold Coin 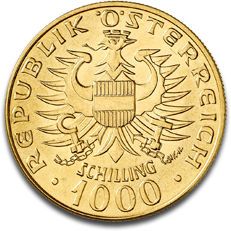 The Austrian 1000 Schilling was first minted by the Austrian Mint in 1976. It commemorates the 1000 years that have passed since the start of the Babenberg Dynasty. In 1976 it was the first time when it was produced a coin with a face value of 1000 Schillings, which was more a symbolic value at that time to represent the millennium of the Austrian rulers between 976 and 1246.

The Babenberg Dynasty was one of the most famous rulers of the Medieval Europe, having great power and status. Also they were the ones that allied Austria with the powerful Byzantine Empire. Another important aspect of this dynasty is that it built the first Gothic palace on the Danube, the Klosterneuberg and was responsible in some part for the multinational character of the Habsburg Empire.

Illustration of the 1000 Schilling

The 1000 Schilling gold coin is graded as being uncirculated. It has been estimated that there have been issued approximately 1,800,000 gold coins during the minting years.

The obverse of the Austrian 1000 Schilling shows the heraldic eagle, a symbol of the Austrian Republic. The Imperial eagle has the breast covered with a shield. At the bottom of the coin are written the following words: REPUBLIK ÖSTERREICH SCHILLING 1000. It is a design belonging to Martha Coufal-Hartl. These words surround the mighty eagle illustrated on this particular gold coin.

The reverse of the 1000 Schilling depicts a knight while it carries a pennant on horseback. It is the Seal of Duke Friedrich II. Around the seal are inscribed the words EINSETZUNG DER BABENBERGER which are translated as the Babenberg Dynasty and the years 976-1976 representing the anniversary for which was minted this beautiful gold coin.

The 1000 Schilling is addressed to investors and to collectors alike due to high quality of the gold used in manufacturing it. It is also a coin desired by history buffs due to the event commemorated by this Austrian coin.

The 1000 Schilling is a great way to store wealth and a beautiful aesthetic way to secure from unfortunate economic conditions.

It is also a gold coin that can be regarded as a suitable gift for people passionate by the great Empires and Dynasties that ruled the world at some point in history. You can be sure that the 1000 Schilling gold coin will be much appreciated and safely preserved by the receiver of this kind of unique gift.

If you decide to purchase the 1000 Austrian Schilling gold coin you will find it available on our website at a competitive price of &eur507.97 which is free of VAT. This price is valued taking into consideration the gold spot price which is announced every day. You can be sure that our price for the 1000 Schilling gold Austrian coin offers a competitive margin to our customers.