You are here: Home / Numismatics / About the 100 Euro Würzburg Gold Coin 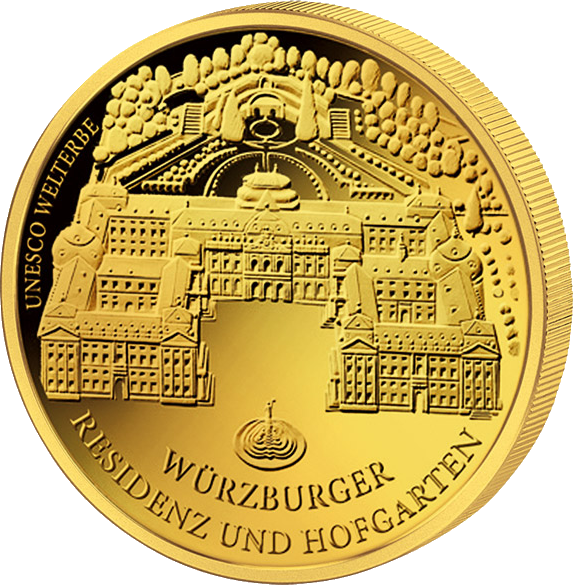 In October 2010 when the 100 Euro Wuerzburg gold coin was issued in order to commemorate the German town with the same name, this 100 Euro gold coins series was already present in the lives of Germans and people all over the globe for 7 years. It all started in 2003 and from the beginning it was an immense success with a demand to match the reputation of the towns celebrated through the issuing of these gold coins.

Wuerzburg was recognized by UNESCO to belong to its World Heritage Sites list in 1981 and in 2010 the 100 Euro Wuerzburg gold coin was minted in order to commemorate this great honor for a town and to remember people to be proud of that.

The quality of the gold used in producing the 100 Euro Wuerzburg gold coin is as good as it is the beauty of this coin that weights 15.55 grams. So this German coin minted in 2010 has 99.90% fineness. The 28 mm gold coin with a thickness of 1.65 mm is manufactured from 24 carats gold.

The obverse of the 100 Euro Wuerzburg gold coin, designed by D. Dorfstecher, depicts the famous and one of the most sumptuous baroque palaces which could not be engraved without its famous gardens. The artistic work put in designing this obverse is simply spectacular. The inscriptions found on the obverse are WURZBURGER RESIDENZ UND HOFGARTEN which is found at the bottom of the coin and also the obvious inscription UNESCO WELTERBE.

The reverse of the 100 Euro Wuerzburg gold coin cannot be declared to be a special one since it depicts the classical elements like: the German eagle, the stars belonging to the European flag, the year in which these gold coins were minted 2010, the 100 EURO face value, and BUNDESREPUBLIK DEUTSCHLAND.

There were only 320,000 gold coins minted for the special year 2010 when it was decided by the German government the commemoration of the town Wuerzburg. There were five issuing mints, each recognized through a letter, therefore each mint manufactured 64,000 gold coins.

When it was issued in 2010, the estimated value of the 100 Euro Wuerzburg gold coin was estimated at approximately 505 Euro. This price was established just like it is established today, for all the gold bullion coins: to the current gold spot price it is added a small premium. Therefore, if we were to compare the price at which this German commemorative gold coin was issued in 2010 with its current value, we would notice how profitable the investments in gold are and the investments in precious metals in general.

Collectors will not acquire the 100 Euro Wuerzburg gold coin for the reason that the price of gold has been in a continuous overall increase. Numismatists will want this coin, minted in 2010, due to its rarity and due to its special design and the detail used in engraving it.

The 100 Euro Wuerzburg gold coin can be found on our website in a Brilliant Uncirculated condition at an affordable price.