You are here: Home / Numismatics / About the 100 Euro Goslar Gold Coin 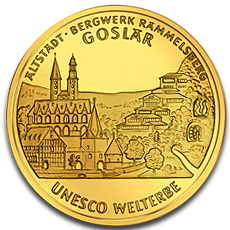 Goslar is a German city added on the list of UNESCO World Heritage Sites and in order to commemorate this special occasion, the German government decided to mint the 100 Euro Goslar gold coin, issued in 2008.

The main characteristics of a 100 Euro Goslar gold coin are: it weighs exactly 15.55 grams, which as you maybe already noticed is the equivalent of 1/2 troy ounces of gold, it has a purity of 24 carats or expressed in a percent its purity would be 99.90% pure gold. Another attribute of this German gold coin issued in 2008 will be its diameter of 28 mm.

On the obverse of the 100 Euro Goslar gold coin it is depicted the medieval center of the Goslar town with its famous medieval cathedral. Other inscription present on the obverse are: UNESCO WELTERBE, ALTSTADT BERGWERK RAMMELSBERG GOSLAR.

On the reverse of the 100 Euro Goslar gold coin it is found the famous and always present German eagle, an inheritance that comes from the time when the marks where the German currency. The 12 European stars also engraved on the reverse and at the bottom of the coin it is inscribed the letter F which means that our particular 100 Euro Goslar gold coin was produced by the mint from Stuttgart. Also found on the obverse are the following: BUNDESREPUBLIK DEUTSCHLAND, the minting year 2008, and 100 EURO which is the denomination of the gold coin.

By investing in a 100 Euro Goslar gold coin, investors will be the beneficial of 15.55 grams of pure gold, gold of 4 carats. That is not at all a few grams of gold which are insignificant. It is a German gold coin worthy to be kept, worthy to diversify portfolios in a very cultural manner; it is especially a gold coin which will always be in demand.

Therefore, a 100 Euro Goslar gold coin an easily be sold in a profitable manner at any time. It has another strong characteristic in the fact that it is an investment free of taxes. However, the strong attribute of this German gold coin minted din 2008 still remains the fact that is made of pure gold whose price is likely to continue to increase in the future.

Collectors will fall in love with the obverse design of the 100 Euro Goslar gold coin, which is unique in the fact that is an engraver in gold of the Goslar city. Its historic impact is so important that Goslar was included among the UNESCO Heritage Sites and so in 2008 was minted this spectacular gold bullion coin.

A 100 Euro Goslar gold coin minted in 2008 can be acquired from our website we are always ready to receive new customers who share our passion for gold coins.