The much-awaited next meeting of the Federal Open Market Committee is this week, the 21st and 22nd of September and the tone is becoming increasingly hawkish. As we noted last week, this meeting is one of the four during the year in which economic projections are published, including the “dot plot” which charts each member’s […]

Last Monday saw gold captured the headlines with a sharp fall in price at the start of Asian hours’ trading. The price had already been on the retreat the previous Friday after strong U.S. employment data lifted the dollar and reignited expectations of early tapering from the Fed – although that has now been reversed […]

Welcome to a very brief overview of the recent performance in the markets. The essentials are captured in the table below and each week we will show a chart of interest. After gold and silver’s change in range in mid-March in response to the United States’ liquidity injections and stimulus programme, last week was a […]

Many questions have been asked as to why there was such a dramatic move to higher US Treasury yields last week. And amid those questions there have been many statements as to how the bond market will perform for the next quarter. Firstly, as I pointed out last week, the “Big Compromise” does little to […]

The equity markets “Christmas”  rally has been fuelled by the expectation of a deal to avert the US fiscal cliff and the imminent release of the next tranche of financial loans to Greece. Both of which to me seem little to cheer about. There should be a deal between the Republicans and the Democrats to […] 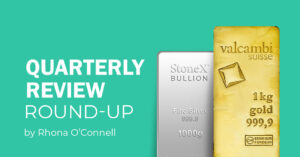