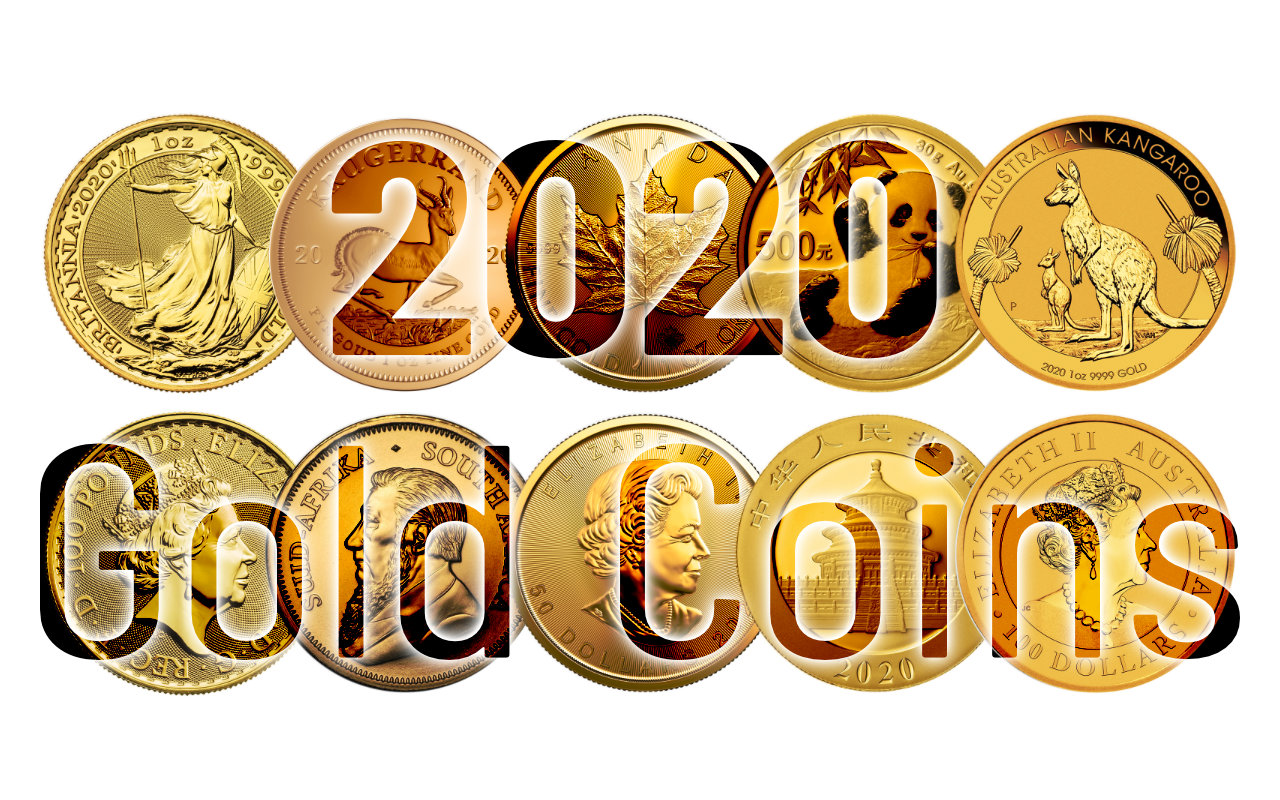 Coininvest is a leader in the market and can, therefore, provide the latest, most sought after coins. We hold close relationships with international mints and refineries which guarantees these products are also passed down with unique savings to our clients. Amongst the most popular 2020 releases is the famous South African Krugerrand, Canadian Maple Leaf, Chinese Panda, Australian Kangaroo, and British Britannia. Each coin is available in different sizes giving you flexibility over your purchase.

The following gives you a short overview of each of these coins and what makes them so special.

The Krugerrand name originates from a mix between Paul Kruger; president between 1983-1900, and the Rand, which is the local South African Currency. A portrait of Kruger designed by Otto Schultz can be found on the coin’s obverse paired with a native image of the Springbok antelope by Coert Steynberg on its reverse. The coin features a unique red tint which is provided by hints of copper (8.33%) which also make the coin more durable.

The Krugerrand Gold Coin is amongst the most popular bullion coins. It was first released in 1967 when bullion coin collection was not as present as it is today. Sales for this coin were very successful which incentivized other international mints to release bullion coins of their own. The Krugerrand coin comes in 4 different gold sizes (1 oz, 1/2 oz, 1/4 oz, 1/10) as well as in 1 oz silver. It is highly popular and internationally recognized to its historical and national meaning.

The Maple Leaf is an internationally recognized symbol of Canada. Over the years it has come to symbolize unity, tolerance, peace, strength, and endurance. Since 1965 it started being featured on the Modern Canadian flag and gained traction internationally as a keystone symbol for the country. The maple tree’s significance roots back to pre-colonial times when Canada’s indigenous people used it as an important food source. Its historical meaning and strong symbolism now stands for important values the Canadian people aim to represent.

First released by the Royal Canadian mint in 1979, the Maple Leaf gold coins are available in many different sizes (1 oz, 1/2 oz, 1/2 oz, 1/10 and 1/20 oz) as well as in 1 oz silver. They have varying face values and can be used as local legal tender. Since its first release, it has become a popular coin amongst the international community.

The Chinese Panda has held symbolic meaning for its citizens for centuries. During the Ming and Xizhou Dynasties, it was said the panda had special healing powers. Panda pelts were gifted to emperors and kings with the purpose of repealing plagues. It was also said the panda resembled the yin and yang due to its black and white appearance. The panda’s calm demeanor demonstrated that when the yin and yang were balanced true harmony could be achieved.

The Panda coin series was first released by the People’s Republic of China in 1982. Since its first release, it has become one of the world’s most popular bullion coins. Its unique design features the symbolic Chinese Panda along with the famous Temple of Heaven Landmark in Beijing. The coin is available in multiple sizes with a purity of .999. Its fine appearance, historical meaning, and unique design make this coin one of a kind.

The Kangaroo Coin series is released by the Australian Mint. It is an internationally sought after coin due to its historical meaning and representation of Australia. The Kangaroo is native to this country and represents the nation’s constant thrive forward. Over the years it has become an important emblem of Australia and appears on the national emblem, and bullion coins.

The Kangaroo Gold Coin is available in 1 oz, 1/2 oz, 1/4 oz, 1/10 oz and in 1 oz silver and can be used as legal tender. It features the famous Australian Kangaroo and a portrait of Queen Elizabeth II in its obverse. The combination of the two gives this coin a unique historical meaning.

Britannia is the female warrior, emblem and national representation of the United Kingdom since 100 B.C. As the Roman Empire expanded and conquered different provinces they used female figures to name different nations. Britannia pertained to the Island of Great Britain.

Britannia has long been present in coinage series first appearing on roman coins over 2,000 years ago under Emperor Hadrian. She first appeared on British coinage in 1672 and was featured on all modern coinage series until its redesign in 2008. She was again re-introduced on the British £2 coin in 2015. Further to this, she appears annually on the Gold, Silver and Platinum bullion coin series which is one of the Royal Mint’s most cherished pieces.

Designed by the famous Jody Clark, the Britannia Gold Coin is an international purchase of choice. It was first released in 1987 and is available in both gold and silver 1 oz sizes.