You are here: Home / Analysis / Gold vs. bitcoin: How do they compare as investments? 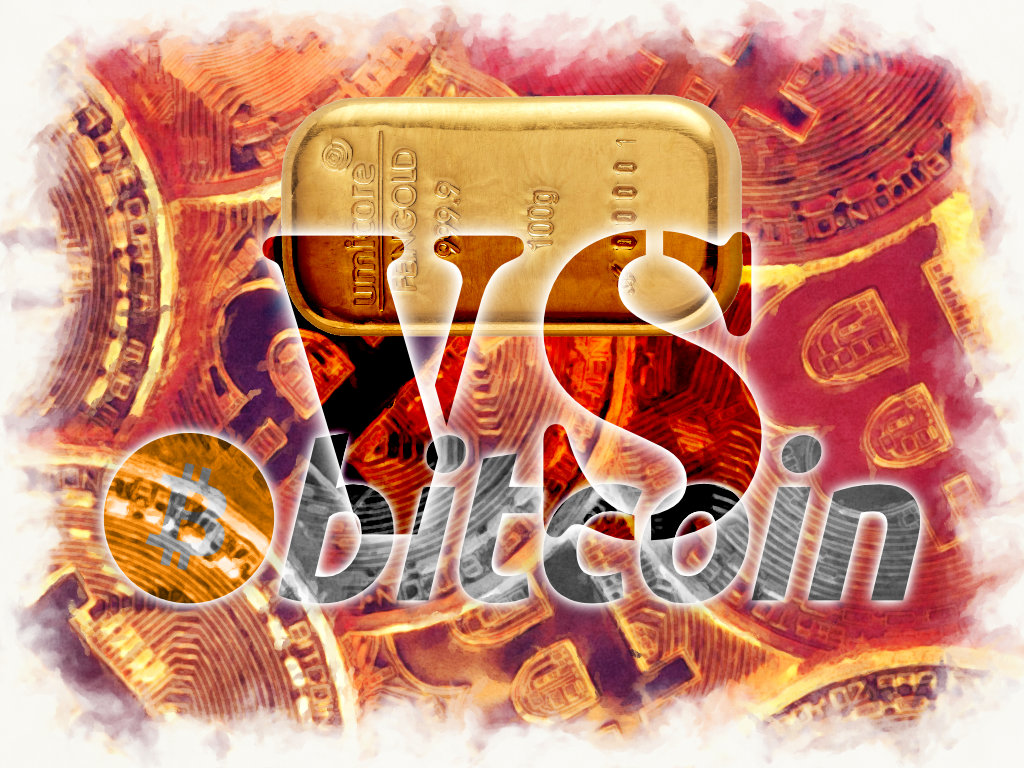 Gold and bitcoin, a type of digital currency that has no central bank, have experienced impressive growth in recent years and share many similarities. In fact, bitcoin has even been labelled as the ‘new gold’ by some.

Gold is tangible whereas bitcoin is a purely digital currency. But can bitcoin’s value match up to gold’s as an investment? We’ve explored the benefits and drawbacks of both to establish their value as investments.

Bitcoin is a cryptocurrency – a new kind of digital currency created using encryption and peer-to-peer technology. Launched in 2007, it’s a newcomer to the commodity market and has received considerable hype ever since it burst onto the scene. It is fast becoming a popular alternative to precious metals like gold.

Part of the revolutionary blockchain movement, it is easily exchangeable because it is entirely electronic. However, it has fluctuated considerably since entering the market and experiences price swings on a daily basis. When it performs well it’s known to generate huge gains, but when it dips it can lead to significant losses.

The mass amount of media attention surrounding bitcoin has historically had a huge influence on its price. If, for example, there is a lot of publicity surrounding the rising price of bitcoin, investors typically rush to purchase it to avoid missing out on potential gains, which can drive prices up even further. On the contrary, if there is negative press, the price may drop and cause people to panic and sell their assets.

For example, the end of 2017 saw bitcoin reach a record high rapidly under intensive press coverage before slowly decreasing through much of 2018.

There is much uncertainty around its future demand. If it doesn’t become a viable currency, what will happen to its price without a good demand?

Bitcoin is not regulated by banks which is proving to be a big problem in terms of cybercrime, especially with regards to the dark web where people are buying illegal drugs, weapons, and personal information for cryptocurrency as the blockchain technology that acts as a public ledger of transactions makes it difficult to track what money has moved where.

The process of ‘mining’ or creating bitcoin is also regarded as requiring a great deal of energy, which could make it a less attractive investment for some in these increasingly environmentally conscious times.

Gold has been around for thousands of years as currency and has many industrial purposes as well as serving as a fundamental metal in the jewellery market. Its essential functional uses mean that it is in constant demand and is a relatively secure investment as you can be confident that demand will keep the price somewhat steady.

As a physical asset, it remains safe in times of economic adversity and is regarded as a great store of wealth and hedge against inflation. Beyond trading on gold as a commodity, it is possible to invest in simply by buying gold coins and gold bars.

Investing in some forms of gold like this can also be tax free. For example, if you invest in legal tender UK gold coins, you will be exempt from having to pay Capital Gains Tax.

Unlike bitcoin and other forms of investments, gold is scarce in supply and difficult to obtain because it needs to be dug up from the ground and processed. There is only so much gold that can be mined and it is not readily available, unlike some investment forms. It can be recycled, although this usually results in a price increase to encourage gold investors to sell.

Gold can be considered a more stable investment compared to bitcoin because of its long-serving historical reliability. Gold has been around for much longer than bitcoin and is, therefore, more widely accepted by investors. Its important use in industry over the years means its growth is unlikely to slow down any time soon.

Bitcoin, on the other hand, is still new to the investment scene and is incredibly volatile, bringing much higher risks but exciting gains. It is expected to stabilise in future when it’s more widely adopted but there is less certainty surrounding its future demand.

While both investments present opportunities for success, gold offers a physical form of wealth and security in a way that electronic currencies like bitcoin can’t and is perhaps a safer way to diversify your investment portfolio. For more investment news, head over to our blog. You can also keep up to date with the price of gold, and look at its past value, with our gold price tracker.