You are here: Home / News / Gold Prices Firm, Silver On A 4-Week High But Will Clinton-FBI Boost Last? 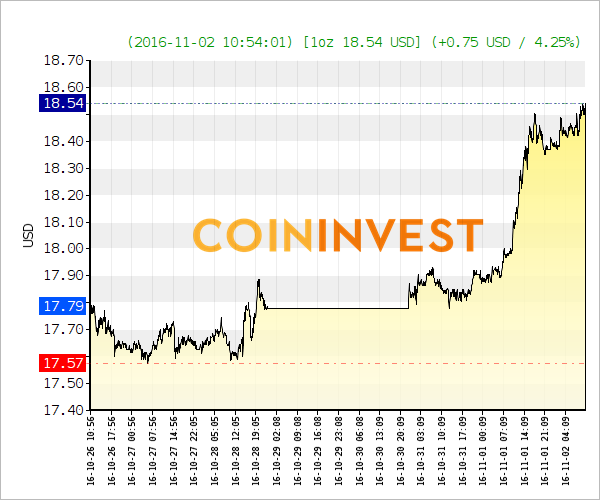 Gold prices stepped over 1% last week to the highest level in nearly four weeks after the US Federal Bureau of Investigation said it has reopened its investigation of Hillary Clinton’s use of a private email server during her time as secretary of state.

Hedge funds and other money managers had already raised their net long positions in Comex gold for the first time in four during the week-ending last Tuesday, new data released by US regulators the CFTC showed last week.

We saw at the same time, the ‘Managed Money’ category of traders cut their bullish betting in Comex silver contracts for the fourth week running. It is now down to the lowest “net long” position since early February.

With her Republican rival Donald Trump having dropped badly in opinion polls, around 1% of Clinton supporters are now less likely to vote for her suggests a survey by pollster CBS/YouGov.

The rally may not last though, as we are at the two-minute warning and Clinton is ahead by two scores, so we would have to see a truly shocking revelation to derail her chances.

Investment demand for gold should speed up towards the US presidential elections because of the higher suspense ongoing in the [Clinton] issue. Gold has now held key technical support and looks set for further gains.

“Consumers are back in the market and retailers are all geared up to meet this demand,” says the mining industry-backed World Gold Council’s India director Somasundaram PR.

With India’s jewelry demand for 2016 to date down over 40% from the first 9 months of last year, “The level of activity only shows that things have come back to normal in trade as well as at the consumer level,” Somasundaram claims.