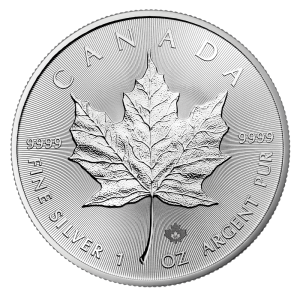 The Maple leaf is considered, as one of the world‘s most beautiful and recognized coins worldwide. The coin was first minted in 1998 and struck every year since, the 2018 version is extra special as it marks the 30th anniversary of the iconic coin.

The Silver Maple Leaf coins contain 1 oz. of .999 pure silver and has a face value of 5 Canadian Dollars making it the highest face value among international Silver bullion coins. The attention to detail of every coin is what differentiates the Canadian Maple leaf from most of its competitors.

The Maple leaf carries a huge amount of significance for Canadians, the maple leaf features boldly in the centre of the national flag and is a national symbol of Canada since the 18th century. Each Bullion coin features a textured maple leaf security privy mark, which is only visible under microscope viewing as well as the RCM’s MintShield technology, which remarkably reduces the occurrence of milk pots.

The Observe of the coin depicts the majestic image of Queen Elizabeth II, which is the only image of the Queen on Canadian coins without a crown. The focal point of reverse side is the sugar maple leaf; you will also see the coins weight and purity. The background of both sides includes radial lines, which is an additional measure of security against counterfeiting.

The 2018 Canadian Maple leaf 1 oz silver coin is available individually packaged in tubes of 25 and in boxes of 500, it will be a wise investment for the savvy collector or investor.