You are here: Home / Numismatics / About the Vienna Philharmonic Gold Coin 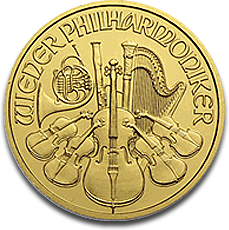 The Vienna Philharmonic Gold coin has been first minted by the Austrian Mint in Vienna in 1989 being the first and the only regularly issued bullion gold coin to be denominated in Euros. The Austrian Mint is one of the oldest institutions in the world that has been continuously producing coinage and currency for over 800 years and one of them is the Gold Philharmonic coin. The Vienna Philharmonic Gold coin is also the only European legal tender produced on a large scale.

The Vienna Philharmonic Gold coin can be considered unique because it has circulated with two different currency values being amongst one of the few. From the first time it was minted in 1989 and until 2001 this Austrian gold coin was denominated in Austrian Shillings and beginning with 2002 in Euros. The uniqueness of the Gold Philharmonic coin can also be assumed when taking into consideration that is the only bullion gold coin to be featured on the side of an airplane, on an Austrian Airlines Airbus A340.

It has a 99.99% fineness being made of pure gold (24K) and it is considered by many collectors the most attractive standard bullion gold coin on the market. The Vienna Philharmonic Gold coin is legal tender in Austria and is a popular coin for investors but most of the times it ends up in private collections being renowned for its beauty, high quality, and purity.

The reverse depicts the concert hall in which performs the Vienna Philharmonic Orchestra. On the obverse of the Vienna Philharmonic Gold coin we find the image of the “Great Organ” and the text “REPUBLIK OSTERREICH” also in an arc across the top as well as the weight in ounces, the country of issue, the purity, and the face value in Euros. Prior to 2002 the face value was expressed in Austrian Shillings.

The 1,000-ounce Austrian Gold coin is recognized by the Guinness Book of World Records to be the world’s largest gold coin. It took 130 hours to mint just on 1,000-ounce Gold Philharmonic coin and the relief on the coin was sculpted by computer and finished by humans.

There is no doubt that besides being popular means for investors to diversify their portfolios because it is a secured and international recognized gold bullion coin, the Vienna Philharmonic Gold coin is beautiful, pure, and perfect from a technical point of view.