You are here: Home / Numismatics / About the Spouse Gold Coin 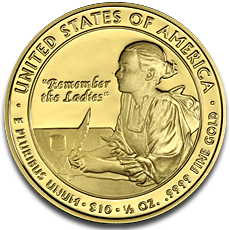 The Spouse gold coin was issued by the American government in order to commemorate and honor the first spouses, meaning the spouses of the American Presidents throughout time. These coins have been issued since 2007, when also the coin displayed on our website was minted. Starting with 2007, every year there are issued 4 gold coins featuring four different spouses. Until now, the minting program is only announced until the year 2016.

The idea for these coins honoring the spouses came when the US government started minting the $1 gold coin that commemorates the Presidents. The Spouse gold coin is even issued when the respective President had no wife. In this case, on the obverse is engraved the Liberty image, which is also present on the American Eagle gold coin.

The reverse of the Spouse gold coin presents a special image which should be representative for the activity and what defined that respective President spouse. In the case of Abigail Adams it is illustrated a portrait of her while writing letters to her husband with the inscription “Remember the Ladies”, which are her famous words. These letters served historians to understand the revolutionary times from that decade. The inscriptions are: UNITED STATES OF AMERICA, E PLURIBUS UNUM, the denomination $10, the weight 1/2 OZ., and the purity .9999 FINE GOLD.

Being the first series that comprises legal tender gold coins that feature women in a consecutive manner of issuing, the Spouse gold coin entire collection presents itself as a great opportunity for collectors. The idea related to these coins is unique which makes it a much desired collection. The Spouse gold coin is a remembrance of the fact that any great man must have besides a great woman.

Investors, having an analytical view, will see in the Spouse gold coin an opportunity to own a valuable coin that has 99.99% purity and weighs 1/2 oz. pure gold. They foresee the possibility of being profitable in the future from the trading of one coin with these characteristics.