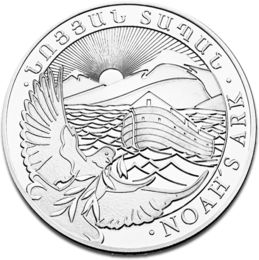 The Armenian Republic has issued a continuation to the silver coin released in 2011 under the name of Noah’s Ark 2012 1oz silver coin. This brand new and modern coin also commemorates the biblical story about the greatest deluge of all times and Mt. Ararat.

Our website presents investors with the opportunity of investing in the Noah’s Ark 2012 1oz silver coin which can be ordered in tubes of 20 pcs or, if it is desired a more impressive investment, there is also the opportunity of acquiring 500 pcs, which will be delivered in a beautiful presentation represented by wooden master boxes.

As the name Noah’s Ark 2012 1oz silver coin transmits, this bullion coin weighs 1oz or 31.1 grams of silver of high quality. It has a fineness of 999/1000 therefore pure silver is the only component.

The obverse of the Noah’s Ark 2012 1 oz silver coin illustrates the coat of arms of the issuing country Armenia which also has its name inscribed at the bottom and at the top of the head side of the coin REPUBLIC OF ARMENIA. The face value of 500 DRAM, which is the equivalent of one euro, is also inscribed on the obverse of Noah’s Ark 2012 1oz silver coin together with the weight and purity 1 Oz Ag 999.

Noah’s Ark 2012 1 oz silver coin is very much alike to its predecessor which was minted in 2011 by Armenia, however these two silver coins are worthy of a collection and have enjoyed great attention from investors around the world.

If we were to make a comparison between the price for the Noah’s Ark 2012 1oz silver coin and the silver bullion coin bearing the same name, only that it was minted in 2011, it would give individuals a strong reason to invest in the two bullion coins. Noah’s Ark 2012 1oz silver coin has a lower price than the Armenian silver coin minted in 2011 for a much obvious reason: as time passes the value of the investment in the precious metal increases.

It is not only the price of the silver that increases on a continuous basis but it also the fact that the premium for silver coins increases because demand becomes higher with the scarcity of the coins. Therefore, an investment is required into the Noah’s Ark 2012 1oz silver coin as it is at an affordable price that will allow owners to be profitable in the future.

For those wanting to take advantage of this opportunity and invest into the Noah’s Ark 2012 1oz silver coin, they can find it on our website.