You are here: Home / Numismatics / About the Lunar Rabbit 1 kg Silver Coin 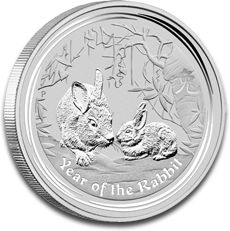 Belonging to the Australian Lunar series, the Lunar Rabbit 1 kg silver coin was issued by the Perth Mint in 2011, being the fourth sign from the Chinese zodiac. Therefore, 2011 was the Year of the Rabbit or of the Golden Rabbit as it alternatively called. The Lunar Rabbit series belongs to a bigger series that stretches on a period of 12 years, the Australian Lunar series.

The Lunar Rabbit 1 kg silver coin, issued in 2011, has a diameter of 100.6 mm and a thickness of 14.6 mm, valid characteristics for all the silver bullion coins with a mass of 1 kilogram minted by the Perth Mint. It weighs one kilogram or 1,000 grams being manufactured from pure silver, a precious metal with a purity of 999/1000.

The obverse of the Lunar Rabbit 1kg silver coin as all Australian bullion coins depicts an elder portrait of Queen Elizabeth II who is facing right. It is in fact effigy engraved by Ian Rank-Broadley, one of the most famous contemporary sculptors.

The legend inscribed on the head side of the Lunar Rabbit 1kg silver coin resembles the one encountered on the Lunar Dragon series: ELIZABETH II, AUSTRALIA, 2011 release year, denomination 30 DOLLARS, and 1KG 999 SILVER which are the weight and respectively the purity.

The reverse of the Lunar Rabbit 1kg silver coin depicts one adult rabbit and a baby rabbit in a forest, staying together in an adorable manner that impresses every viewer. The only inscription is Year of the Rabbit.

The Lunar Rabbit 1 kg silver coin can be used as a present that if you are an eccentric person that has the possibility of offering such a gift. The persons born in the Year of the Golden Rabbit are said to be really friendly so you will equal their friendliness through an expensive gift that will increase its value in the future becoming highly profitable as years go by. They are a bit introverted but after discovering the real value of the Lunar Rabbit 1kg silver coin the receiver of the gift will surely show all his joy. People born in the Year of the Rabbit as those born in the following years: 1927, 1939, 1951, 1963, 1975, 1987, 1999 and 2011 when this Australian coin was issued.

However, the Lunar Rabbit 1 kg silver coin is mainly used for investment, massive investment taking into consideration its weight. It is a precious asset not only for the reason that it is produced from a precious metal. The evolution of its price is what makes it special and we should also add to that its high liquidity even though we are talking of a coin that weighs 1 kilo of pure silver.