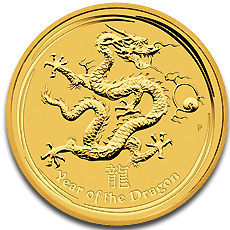 Lunar Dragon is a bullion gold coin minted by the Perth Mint in 2012 when was celebrated the Year of the Dragon by the Australian Lunar Gold Proof Coin Series II. The dragon is the fifth from twelve animals belonging to the Chinese zodiac. So these illustrations on the bullion gold coins minted by the Perth Mint have taken place for 12 years. The Lunar Dragon is issued as legal tender in Australia under the Australian Currency Act 1965 and each coin is accompanied by a certificate of authenticity.

It is said about the people born in the dragon year that they are independent, passionate, and enterprising, having great confidence, charismatic, natural born leaders, and brave. The perfect way to suggest these thoughts to a person is to offer them the Lunar Dragon gold bullion coins. The presentation of the Lunar Dragon gold coins is also spectacular, each coin coming in its own oval-shaped display case. The case comes in an illustrated shipper and it brings a granite effect base and a glossy timber-effect lid.

The obverse of the Lunar Dragon can be regarded as a classical one for most of the Australian gold coins depicting the portrait of the crowned Queen Elizabeth II facing right, designed by Ian Rank-Broadley.

The reverse, as the name of this gold coin suggests, depicts a traditional Chinese dragon which is a long and serpentine creature that has four legs. Also on the reverse it is written the word dragon in Chinese and also the words Year of the Dragon and the standard P representing the Perth Mint.

These exquisite Lunar Dragon coins are available on our website at affordable prices and they come in all the denominations issued by the Perth Mint.