You are here: Home / Numismatics / About the Lunar Dragon 5 oz Silver Coin 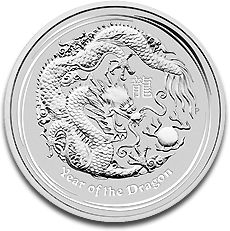 All these series, among which is the Lunar Dragon with its Lunar Dragon 5oz silver coin plus other denominations, with the predecessors represented by other four signs from the Chinese zodiac, a mouse, a buffalo, a tiger, and a rabbit, belong to the Lunar series issued by the Australian mint starting with 2008 and it will end in twelve years, meaning in 2019 the Year of the Pig.

When thinking of the design of the Lunar Dragon 5 oz silver coin we could simply state that it is beautifully realized.

The reverse of the Lunar Dragon 5oz silver coin illustrates the fifth sign from the Chinese zodiac, a dragon with four legs holding a pearl of wisdom. The inscription present is Year of the Dragon and the letter P, symbol of the Perth Mint.

Regarding the mintage of the Lunar Dragon 5 oz silver coin, which is a data that interests all investors and collectors, the number of issued coins for the public, was set at only 5,000 coins. An immediate conclusion that can be drawn from this scarce number when it comes to a bullion coin with such high demand like the Lunar Dragon 5 oz silver coin is that its premium will increase in the future.

If we add to the increase of the premium due to high demand reported to scarce supply, the increase in the silver price, therefore a positive evolution of the silver market that was registered in the past three years, the individuals owning a Lunar Dragon 5oz silver coin will be very profitable.

The advantage with the Lunar Dragon 5 oz silver coin issued in 2012 is the following: the price for the 5 oz is not five times the price of 1 oz Lunar Dragon. This is the main reason for which investors should acquire this coin. Individuals would acquire a high quantity of pure silver at a very convenient price for their future profitability.

The Lunar Dragon 5 oz silver coin is available on our website at a price to which it is added a small VAT.