You are here: Home / Numismatics / About the Kookaburra 1 oz Silver Coin 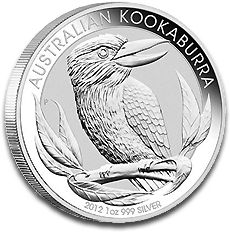 The Kookaburra 1oz silver coin that was issued in 2012 by the Perth Mint and it was announced as the first coin from an annual release. Investors and collectors are ready to start a new collection that will comprise this lovely Australian bird.

The Kookaburra was also a bullion coin in proof quality minted in silver and gold that belonged to the series Discover Australia also issued in 2012. It was a spectacular series that also included the goanna, the red kangaroo, the green and gold bell frog, and the aquatic representation from the part of the whale shark.

The Kookaburra 1 oz silver coin was struck in proof quality from 99.90% silver at a weight of 31.10 grams. Therefore it represents a coin that weighs one troy ounce of pure silver. It has a diameter of 32.60 mm and a thickness that measures 6.00 mm.

The obverse of the Kookaburra 1oz silver coin, a modern bullion coin issued in 2012, depicts the always present effigy of Queen Elizabeth II. In a circle there are disposed the next inscriptions: ELIZABETH II, AUSTRALIA, 1 DOLLAR which the face value of the coin.

The reverse of the Kookaburra 1oz silver coin that was minted in 2012 is exquisitely designed and it involved a meticulously engraver in order to portray the kookaburra that is present on the tail side of the coin. The Kookaburra is standing on a tree branch that has gum leaves, its natural habitat.

The reverse of the Kookaburra 1oz silver coin, besides its design in high relief, also bears the following inscriptions: AUSTRALIAN KOOKABURRA, the issuing year 2012, the weight 1oz, and the purity 999 SILVER. It is a model of inscriptions that is also found in the engraver realized for the Koala silver bullion coins series.

It was announced by the Perth Mint that only 10,000 coins will be issued on the market for investors and collectors. It is an extremely limited number however the owners of a Kookaburra 1oz silver coin issued in 2012 can consider them lucky and should look at themselves as to people that make wise investment decisions.

With such a limited number of copies of silver bullion coins illustrating a Kookaburra it is quite foreseeable that the value for the Kookaburra 1oz silver coin will increase in the future. For now this thing is not quite obvious because there has not been such a long time that has passed since the silver coins were issued. However, as months or years go by and fewer coins are available for trade, the profit made from the Kookaburra 1oz silver coin will be quantifiable.

The value of the Kookaburra 1oz silver coin is determined by the fluctuations of the silver market. Any large investor can determine an increase in the silver price therefore it is a volatile price to which it is added a premium that increases when demand is higher.

If an individual is willing to invest into this limited mintage that is represented by the Kookaburra 1oz silver coin, he or she will find it on our website.