You are here: Home / Numismatics / About the Gold China Panda Coin 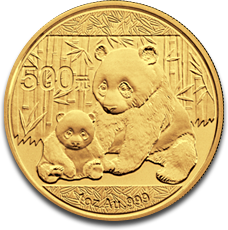 The Gold Panda Coin, a success of the Shenzhen Guobao Mint

The Gold Panda Coin, minted by the People’s Republic of China beginning with 1982, is a gold bullion coin that changes its design every year which makes it so desirable regardless of the fluctuations in gold`s price. These Gold Panda Coins with 99.9% in fineness were a great success among bullion coins in the 1980s. The China Panda gold coins are legal tender in China and are issued in 25, 100, 200, and 500 Yuan face value denominations corresponding to 1/20, 1/10, 1/4, 1/2, an 1 troy ounces of gold.

There was an exception regarding the changing of the design every year in 2001. The China Panda gold coin from 2001 had the same design as the Gold Panda Coin from 2002. In 2002 collectors revolted against this policy which made China to change the design for 2003 and for the years to come.

The China Panda gold coin comes in sizes from the tiny twentieth-ounce, tenth-ounce, quarter-ounce, and half-ounce to 1 troy ounce with their corresponding denominations that differentiate the Gold Panda Coins according to their weight. The 1-ounce coins are used in manufacturing necklaces and the smaller varieties of the Gold Panda Coin are used in making pendants, earrings, and bracelets, thus encouraging the jewelry industry to use gold coins when designing different pieces.

Description of the Gold Panda Coin

As we have already said, the design of the Gold Panda Coin changes every year and by that it is to be understood that the reverse depicting different portraits of endangered giant panda is the one that changes. Of course, with the exception of the years 2001 and 2002 that had the same design. The inscriptions that are constantly on the reverse are the size, the fineness, the symbol of gold AU, and the monetary amount of the respective gold coin.

On the obverse of the of the Gold Panda Coin we have, in the center, the illustration of the Temple of Heaven (Tien Tien) and on top characters saying People’s Republic of China (“Zhonghua Renmin Gongheguo”). In the bottom it is inscribed the year in which the gold coin has been issued. There is a vast majority of China Panda gold coins that are commemorative and when that is the case, the commemorative theme is marked on the obverse as well.

The China Gold Coin Corporation (CGCC) is the official distributor of the gold and silver bullion coins and the distributor in the United States is Panda America since the first issue from 1982.

The gold Panda is the top coin for China`s collectors who are encouraged by their government to invest into gold and this fact doesn`t stop only to Chinese collectors. In the US, the warm and fuzzy panda illustrated on the coin has its place in the hearts of many collectors which have installed the Gold Panda Coin as a premium-priced bullion coin.

The Panda coin is minted each year into a limited number of copies some of which are used in jewelries and some are sold as bullion gold coins and can be damaged in handling. After all these, the number of copies left is quite limited making from the China Panda gold coin a sought after coin with an increased value.

We could affirm the fact that the Gold Panda Coin has been the pioneer of the idea of collectible/bullion coin because compared to other bullion gold coins, Pandas are issued at a higher value over the spot gold price.

One clear example that illustrates just how appreciated is the Gold Panda Coin by collectors is the fact that in 1987 a one ounce gold Panda minted in 1982 was traded for more than $3,000 which can be described as a Panda mania which lasted until today and surely it will last for the years to come.