You are here: Home / Numismatics / About the Full Sovereign Gold Coin 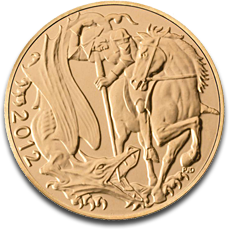 The full Sovereign is a commemorative gold coin issued by the Royal Mint in 2012 in order to celebrate the Diamond Jubilee. The Diamond Jubilee represents 60 years since Queen Elisabeth has reigned in the United Kingdom.

Therefore, the full Sovereign 2012 it it’s the newest minted sovereign, the consequence of this being that these sovereigns are individually sealed and they are found in the mint condition, making them very wanted by everyone from investors to numismatists.

The full Sovereign produced in 2012, to commemorate the present Queen, is a special one but that does not mean that the common characteristics of the sovereigns do not apply to this one, also. We are talking about weight, purity, thickness, and diameter.

This full Sovereign produced in 2012 has the same standard weight of 7.98 grams but only 7.32 grams are pure gold which means 0.2354 troy ounces of gold only with a diameter of 22.05mm and a 1.52 mm thickness. This weight gives us 22 carat purity or 91.67% fineness because the gold used in manufacturing the full Sovereign is alloyed with cupper.

Why Invest in the 2012 Full Sovereign

Investors seek all the time to secure their assets and diversify their portfolios and there is nothing best for that than a beautiful full Sovereign produced in 2012, a gold bullion coin recognized in the entire world. And that, especially in unsecure financial times when gold is regarded as an economic refuge and at the same time a beautiful solution in the form of bullion gold sovereigns. The newest is the 2012 full Sovereign, considered to be the crown jewel coin of the Royal Mint.

Another reason is that by trading full Sovereign, investors secure their privacy since the sovereigns are free from Capital Gains Tax because sovereigns have the status of legal tender in the United Kingdom and a face value of one pound sterling therefore they are classified under the money/sterling category. Therefore, the profit is exempt from taxes included the VAT.

So we can certainly state that the full Sovereign, as well as the other sovereigns, is an ideal method for investment since it can be easily traded due to its popularity and value. We offer the full Sovereign 2012 at the convenient price of $426.05 which is free of VAT, as mentioned above.

The only downside of this full Sovereign produced in this very year is that it have been minted only 5,500 copies and the demand is expected to exceed that of 2010 and 2011 so investors should take an action as soon as they can.

New Design for the 2012 Full Sovereign

The obverse of the 2012 full Sovereign illustrates the bust of the celebrated Queen Elisabeth, a current portrait designed by Ian Rank-Broadley FRBS and at the bottom the production year, 2012.

The idea of the reverse for the full Sovereign minted in 2012 has remained the same; it is still about the mythical slaying of the dragon by St. George which has been illustrated since the first sovereign from 1817. The only difference is that the reverse of this commemorative sovereign has been redesigned by Paul Day making it the fourth time in history for the changing of the image depicted on the reverse.

The new reverse shows St. George as a knight in Gothic armor killing the scary dragon. We could say that the reverse is as amazing as the long reign commemorated by this 2012 full Sovereign.