You are here: Home / Numismatics / About the 50 Mexican Peso Gold Coin 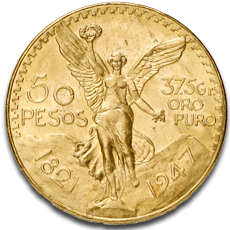 50 Mexican Peso Gold Coins One of the Largest Bullion Coin

The 50 Mexican Peso gold coins were minted by the Mexican government between 1921 and 1947. This denomination, belonging to the Mexican gold coins series, represented one of the largest bullion coins minted which lasted until the introduction of the Krugerrand, by South Africa, in 1967.

For Mexico the 50 Mexican Peso gold coins have an immense historic and sentimental value because they were started being issued when 100 years passed since the Mexican freedom was gained.

The 50 Mexican Peso gold coins have impressive characteristics, as following: the weight of pure gold is 37.50 grams which is more than 1 troy ounce of pure gold, the overall weight sums up to 41.67 grams, these coins were minted in a diameter of 36 mm, and their fineness is 90.00%, 10.00% represented by the alloy of copper.

The obverse of the 50 Mexican Peso gold coins is common to all the coins belonging to this series, being represented by the Mexican eagle while standing on a cactus with a snake in his beak. This is a design with inspiration from the Mexican coat of arms. ESTADOS UNIDOS MEXICANOS is the legend present on the obverse, an inscription to symbolize the Mexican independence.

In 1910 was celebrated the centennial since the war between Mexico and Spain started. In order to celebrate the gained independence, the Mexican government decided to build an immense statue that has in the top an angel also known as the Angel of Independence that is depicted on the reverse of the 50 Mexican Peso gold coins. In the right hand it holds a laurel crown to symbolize the Mexican victory and in the left one the angel has a broken chain to transmit the gained freedom.

The obverse of the 50 Mexican Peso gold coins is inscribed with the minting year 1947, the year in which the war ended 1821, the face value of these coins 50 PESOS, and the weight of pure gold 37.5 Gr. ORO PURO.

Investors, and people in general, should learn from lessons like these and they are plenty. They should invest into gold whenever possible because assets in the form of 50 Mexican Peso gold coins are easily tradable, especially in hard financial times, and so these are assets that can become liquid whenever the owner wants.

The 50 Mexican Peso gold coins, besides being incredibly beautiful, they are also affordable, taking into consideration their weight of pure gold, which overcomes a troy ounce, and also if we think at how popular they are, and can be found on our website.