You are here: Home / CoinInvest / About the 25 Schilling Gold Coin 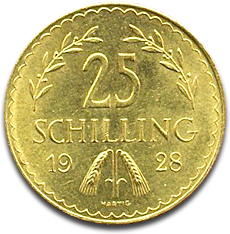 The 25 Schilling gold coins have a purity of 90.00% which makes these coins very attractive to investors. They also contain 0.1702 troy ounces of gold the equivalent of 5.29 grams, having a total weight of 5.8810 grams. These Austrian gold coins have a diameter of 21 mm and are graded as being uncirculated.

Design of the 25 Schilling Gold Coins

On the reverse you can see written the inscription 25 SCHILLING between two edelweiss sprays and the minting year at the bottom of the gold bullion coin divided by wheat sprigs. In small letters it is written the name of the designer Hartig who is a famous artist who worked for the Austrian Mint.

The obverse of the 25 Schilling gold coins features the symbolic eagle of the Austrian Republic together with the words OSTERREICH REPUBLIK. The eagle has an Austrian shield on his breast and a sickle and a hammer in talons.

If you decide to invest in gold, which kind in fashion now due to the undesirable economic conditions, you have a multitude of options from where to choose, even if you are a novice in the field of bullion gold coins.

They are also appropriate gold coin for collectors, especially for those that want to have the complete collection of Austrian gold coins.

If you want to sell this type of Austrian bullion gold coins we can contact us on our website. If you decide to buy 25 Schilling gold coins we will find them at the price of EUR 253.74 which is free of VAT.