You are here: Home / Numismatics / About the 20 Mexican Peso Gold Coin 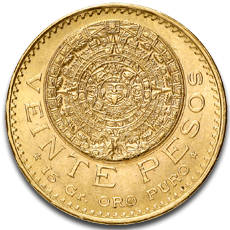 Being firstly minted in 1917, the 20 Mexican Peso gold coins commemorate the Aztec calendar, a Sun stone which was destroyed in 1521 by Hernan Cortes and then rediscovered in 1970. This calendar is known throughout the world and is, without doubt, the reason for which Mexico is such a popular country.

The 20 Mexican Peso gold coins are incredibly beautiful, with a reverse that simply mesmerizes the viewers. There are two periods in which these coins were issued: between 1917 and 1921 and another issuing in 1959. A coin minted in that year is displayed on our website.

The 20 Mexican Peso gold coins have the weight of pure gold of almost a half of troy ounce, more exactly 15 grams. These coins come in a considerably high purity of 90%, which means that the remaining 10% is represented by the alloy copper. So their total weight is 16.6666 grams and the 20 Mexican Peso gold coins have a diameter that measures 27 mm.

Three of the Mexican Peso gold coins feature the portrait of Miguel Hidalgo, a revolutionary priest, on the reverse. These coins have the following denominations: 10 Peso, 2.5 Peso, and 5 Peso. If the reverse is not common to all the coins belonging to this gold series, the obverse is a common characteristic of all the Mexican coins and we will see how in the description of the 20 Mexican Peso gold coins.

An eagle standing on a cactus after capturing a serpent in his beak is engraved on the obverse of the 20 Mexican Peso gold coins. There is also the legend ESTADOS UNIDOS MEXICANOS and the year 1959, when this gold coin found on our website was minted.

The reverse of the 20 Mexican Peso gold coins depicts the Aztec Calendar which is illustrated in the form of a stone known as the Sun Stone or Cuauhxicalli. The legend comprises the face value VEINTE PESOS and the weight of pure gold 15 Gr. ORO PURO.

Mexican gold coins, including the 20 Mexican Peso gold coins, are very popular among investors and collectors ever since they were minted. These Mexican gold coins with a denomination of 20 Pesos were first introduced in 1917 and since then they attracted a lot of curiosity.

For collectors, the 20 Mexican Peso gold coins are coins that commemorate the Aztec calendar which is so debatable when it comes to its prophecies and calculus regarding the end of the world. The Aztecs are surrounded by such a mystery that is logical for this coin to be so well regarded. They could be compared with the Egyptians concerning the intrigues raised. The Mexican gold coins series will make for a great collection which could become valuable in the future.