You are here: Home / Numismatics / About the 100 Pesetas Silver Coin 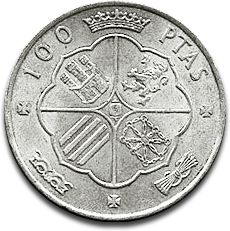 This article is about a silver bullion coin issued by Spain almost half a century ago, the 100 Pesetas silver coin issued in 1966 under the reign of Franco, whose entire name is Francisco Franco y Bahamonde.

On the obverse of the 100 Pesetas silver coin is depicted the portrait of Franco facing right. Whether he was or not a great political leader for Spain is debatable but nonetheless he is a political figure that has remained in history and should be interested for collectors to own such a silver bullion coin. The legend on the obverse of the 100 Pesetas silver coin reads: 1966 the issuing year of this coin by the Spanish government and FRANCISCO FRANCO CAUDILLO DE ESPANA POR LA G. DE DIOS.

The reverse of the 100 Pesetas silver coin illustrates different Spanish emblems within the design of a flower. The face value of 100 PTAS is divided by a crown.

The 100 Pesetas silver coin that was issued in 1966, meaning almost half a century ago, and it is a good lesson to demonstrate how the price of a precious metal can evolve over time. So it should serve people as a learning tool for investing into silver and gold, depending on their financial capabilities and on their preferences.

When the 100 Pesetas silver coin was issued in 1966, the price of silver per troy ounce was around the value of $5. Nowadays, due to the financial crisis from 2007, the silver price has increased on a steady basis, reaching unexpected levels. This fact has made investors decide to invest into silver and gold bullion coins, like the 100 Pesetas silver coin. It really does not matter whether it is a modern bullion coin or a coin that has a rich history. What matters is for investors to analyze the evolution of the silver market and decide when it is the best time to trade bullion coins.

Taking into consideration that the price for silver at the moment when writing this article is approximately $29 and considering that the 100 Pesetas silver coin weighs 0.489 troy ounces of pure silver, it will result that the value of this coin should be $14.181 to which a really small premium is added.

As investors and collectors can notice, the 100 Pesetas silver coin is an incredibly affordable coin that deserves to be invested in due to the increase in the price for silver, and is available on our website.