You are here: Home / Numismatics / About the 100 Kronen Gold Coin 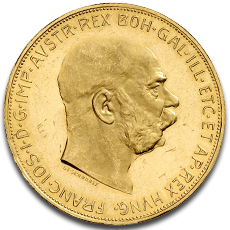 It was minted by the Münze րsterreich AG Mint in a gold content of 30.49 grams and a total weight of 33.8750 grams. From it first mint in 1892, the 100 Kronen was minted until 1988, an issue in almost every year with few exceptions taking place. However, as a denomination the 100 Kronen gold coins were issued only until 1918, when Austria became a republic.

On a 100 Kronen gold coin we will find the same design as 100 years ago. The Austrian Corona, as it is also known for, depicts on the obverse the uncrowned bust of Emperor Franz Josef I who is facing right accompanied by the inscription FRANC IOS I D G IMP AUSTR REX BOH GAL ILL ET AP REX HUNG.

On the reverse of the Austrian 100 Kronen it is illustrated the famous crowned double headed eagle which is a representative symbol for the Austrian Empire. It is displayed the Austrian Coat of Arms.

On the reverse of all the 100 Kronen gold coins, at the bottom of the coins, it is inscribed the 1915 commemorative year no matter the year in which the Austrian gold Corona coins were minted. This is valid for all the coins minted after Emperors Franz Josef death. This particular year brings homage to one of the European Monarchs with one of the longest modern reigns.

100 Kronen gold coins demonstrated how volatile an economy can be when the paper krone became pretty much worthless. It was a phenomenon that happened in conditions that resemble those of today almost entirely. Then it was the end of World War I that brought hyperinflation which made paper money worth 14,000 times less than the 100 Kronen gold coins.

Nowadays we are faced with an inflationary economy with banks printing money and governmental debts increasing. These are strong reasons for which the intrinsic value of gold has been continually increasing. There are reasons for which investors have turned their attention to gold and especially gold coin like the 100 Kronen which is a beautiful way to diversify ones portfolio. The 100 Kronen gold coins are traded in order to preserve wealth and increase fortunes and are also investment means that are taxes free.

Another factor that influences investors into buying the Austrian 100 Kronen is its low premium, compared to other bullion gold coins, due to the fact that these coins are no longer minted. These coins are known among gold dealers as cheap gold.

In case you orientate your attention towards a 100 Kronen gold coin you find it on our website, priced according to the gold spot price which is daily reported.