You are here: Home / Numismatics / About the 1 Rand Gold Coin 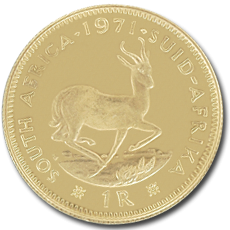 The 1 Rand gold coin was firstly introduced by the South African government in 1961 as a replacement of the Half Pound as the official South African currency. The reason for making this replacement is that 1960 was the year when South Africa became a republic. The gold coin displayed on our website was issued in 1971, as inscribed on the reverse. The Rand gold coin comes in two denominations: the 1 and the 2 Rand.

The obverse of the 1 Rand gold coin depicts the portrait of Jan van Riebeeck who was the founder of Cape Town. The inscriptions present on the obverse are: UNITY IS STRENGTH and EENDRAG MAAK MAG.

Even though the 1 Rand gold coin has not been minted since 1983, it is still considered legal tender in South Africa. However, not many coins of this type can be found in circulation because they present an attraction for collectors, which remove them from circulation by investing into these small coins.

There were a variety of gold coins that throughout history gave lessons to people that investing into gold is a safe way to preserve their assets. The most recent and concluding example is the 1994 crisis in Mexico. During that crisis the value of the 50 Peso gold coins increased as much as 24 times their face value. And when people have the possibility of investing into affordable coins, like the 1 Rand gold coin, they should take advantage of this opportunity.

The 1 Rand gold coin is still affordable due its small size. However, it can become an affordable coin in two situations: if demand for this coin increases increasing its premium or if the gold spot price increase.

You can find the 1 Rand gold coin on our website at a price free of VAT.